The Story Behind the Rawlings and Fielding Mysteries

In 1983, Dinah Lampitt (Deryn Lake) was approached by Canada Dry, the drinks manufacturers, to research the origins of H.D. Rawlings and Co, makers of tonic and soda waters, now bought up by Canada Dry and part of their empire.

Canada Dry were expecting a challenge from Schweppes (founded in 1783) that they - Schweppes - were an older company than Rawlings, who claimed to have been in business since the mid eighteenth century.

Dinah was given two weeks to solve the case and the only clue she had available was some Victorian correspondence from H.D. Rawlings, giving the address 2, Nassau Street, Soho, and claiming to have been at those premises for over a hundred years.

Armed with this scant piece of information, Dinah set forth and eventually tracked down a John Rawlings, Apothecary, by going through the records of the Worshipful Society of Apothecaries, held in the Guildhall. Wondering whether this could be her man - for Jacob Schweppe, who discovered the secret of carbonating water in Switzerland in 1783, was also an apothecary - Dinah needed a conclusive piece of evidence to link John Rawlings to the Victorian firm of H.D. Rawlings.

That might have been the end of the story, but when she decided to take a break from historical romances and turn to crime, as she says herself, "like a flash, I remembered John Rawlings and started to investigate the times in which he lived. And who should I find but the Blind Beak, John Fielding himself, alive at the same time and Principal Magistrate. I had my detective and Death in the Dark Walk was born. The rest, as they say, is history..."

John Rawlings proved a popular detective, and his many adventures have been republished more than once. They are listed below, in order of original publication. 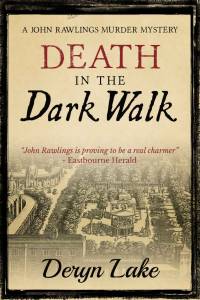 Death in the Dark Walk

Introducing John Rawlings, a young man newly out of his apprenticeship. Having finished his indentures, Rawlings is celebrating at Vaux Hall Pleasure Gardens when he trips over the body of a young girl.

Summoned to the magistrate's office as prime suspect, Rawlings not only clears his own name but impresses the blind magistrate, John Fielding so much with his powers of recollection that he is asked to investigate the crime.

From gaming hell to fashionable house, Rawlings follows a trail of lustful liaisons and illicit intrigue which prove beyond a shadow of doubt that the girl has quite a past - a past filled with threatening secrets.

Death in the Dark Walk was originally published in 1994; it is now available in a Kindle edition from Lume Books. 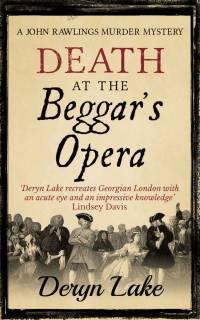 Death at the Beggar's Opera

This evocative Georgian mystery features the return of John Rawlings, the apothecary with a talent for detective work, and John Fielding, the phenomenal blind magistrate whose Runners formed London's early police force.

John Rawlings is among the beau monde enjoying a performance of The Beggar's Opera in Drury Lane when the leading actor - the notorious philanderer Jasper Harcross - dramatically falls to his death on stage.

As Rawlings and the Blind Beak hunt for vital clues, they discover a hotbed of rivalry both on and off the stage which produces numerous suspects and questions. As the search takes on a new intensity, John Rawlings soon finds himself on an intriguing trail of obsession that leads to the dark heart of a cold-blooded murder.

Death at the Beggars Opera was originally published in 1995; it is now now available in a Kindle edition from Lume Books. 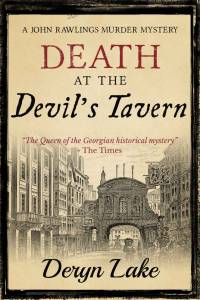 Death at the Devil's Tavern

John Rawlings, the exuberant young apothecary, is celebrating in The Devil's Tavern, a popular if notorious haunt for sailors and smugglers. Stumbling across a corpse that has been fished out of the Thames, he identifies it as Sir William Hartfield, the bridegroom who had failed to show at his own wedding earlier that day.

As the drowning reveals itself as murder, Rawlings is called upon by London's revered sightless magistrate, John Fielding, to investigate the colourful members of Sir William's family - from terrible old Lady Hodkin to her downtrodden daughter, and from Roger, flamboyant man of fashion to the outrageous twins who share an elaborate past.

Death at the Devil's Tavern was originally published in 1996; it is now now available in a Kindle edition from Lume Books. 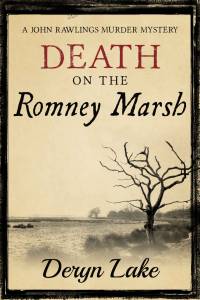 Death on the Romney Marsh

Summoned to attend a patient in a house near the lonely Romney Marsh, Rawlings does not suspect that he is walking into a web of conspiracy, intrigue and mystery. Until he discovers a body near a deserted church, bearing a coded document.

Rawlings reports the case to London's famous blind magistrate John Fielding who identifies the victim as a French spy master. So Rawlings returns to the marshes to investigate who, amongst the colourful local characters, could be harbouring politically explosive secrets...

Death on the Romney Marsh was originally published in 1998; it is now now available in a Kindle edition from Lume Books. 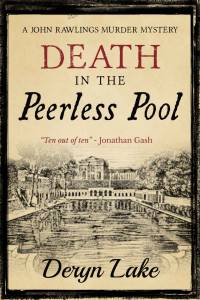 Death in the Peerless Pool

John Rawlings, London's most colourful apothecary and occasional sleuth, is relaxing at the popular swimming baths, the Peerless Pool, when his peace is shattered by the alarming discovery of a drowned woman.

The victim is identified as Hannah Rankin, an assistant at the nearby St Luke's asylum for the insane.

Assigned to the case by John Fielding, London's famous blind magistrate, Rawlings doesn't realise that he is scratching the surface of something far more complex than an isolated murder. At St Luke's Rawlings discovers a vital clue to Hannah's hidden past which leads to a strange case concerning a child's mysterious disappearance. Was Hannah involved? And why do his investigations lead him again and again to a house of sinister secrets in Bath?

Death in the Peerless Pool was originally published in 1999; it is now now available in a Kindle edition from Lume Books. 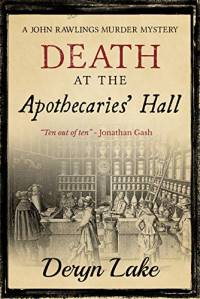 The scene was an exact replica of the one that had taken place twenty-four hours earlier. John Rawlings stood in the shop at Apothecaries' Hall buying the herb known as true-love. The only difference was that both he and the shop owner were buzzing with intrigue as they discussed the extraordinary outbreak of food poisoning which had stricken the liverymen who attended dinner at the Worshipful Society the previous day. And how Liveryman Alleyn might have died had John not given him the remedy of true-love.

Except the following day Liveryman Alleyn does die.

Under the brief and guidance of London's famous blind magistrate, John Fielding, Rawlings is asked to investigate whether it is a deliberate case of poisoning. But who would want to poison the apothecaries? And were they targeting the Society or specifically the deceased?

As John searches for gossip, he discovers that a fellow apothecary visited the dying man's house on the morning of his death, that the Beadle had fallen out with the Master, that a bereaved parent whose son died as a result of misdiagnosis has vowed vengeance on the entire Society.

Death at Apothecaries' Hall was originally published in 2000; it is now available in a Kindle edition from Lume Books. 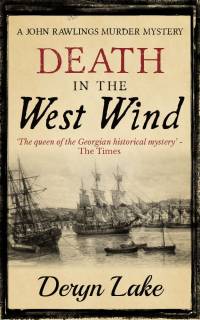 Death in the West Wind

The apothecary John Rawlings and his new bride are honeymooning in Devon, but the discovery of a badly beaten corpse on a ghost ship cuts their holiday short.

The death of Juliana van Guylder and the subsequent disappearance of her brother, Richard, draw John into an investigation in which the suspects include the mysterious Society of Angels, a lone highwayman, and a phantom coach complete with headless coachman.

Needing answers and knowing he is neglecting his bride in search of the truth, John summons Joe Jago and the Flying Runners from London for help in his investigation.

But his determination to discover the truth puts him in danger... a danger from which he may not be able to escape.

Will Rawlings be able to find the truth or will his pursuit end in tragedy?

Death in the West Wind is the seventh novel in Deryn Lake's highly acclaimed Georgian mystery series; it was first published in 2001. It is now available in a Kindle edition from Lume Books. 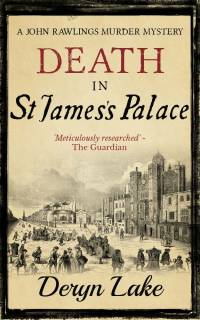 1761, London. Famous magistrate John Fielding - "the Blind Beak" to the mob - is to be honoured with a knighthood.

Founder of the Runners, London's metropolitan police force, John Fielding is one of several important members of the community who gather at St James's Palace for the investiture. As the invited audience eagerly crane for a first glimpse of the new queen - widely rumoured to be the ugliest the country has ever seen - a terrible accident occurs when one of the crowd, a nobleman George Goward, tumbles down the great staircase to his death.

Of all the assembled gathering, not one person saw him begin to fall. Even those standing closest to Goward had their eyes fixed on the royal entrance; his wife, the portly Lady Mary Goward, Jack Morocco, known to some as the Black Buck, the notorious Elizabeth Chaudligh, a lady infamous in certain circles for her talents in the bedroom.

Only one person witnessed anything untoward - John Fielding, a blind man. A whispered sentence, an exhalation of breath - these are the only clues available to suggest the fall was no accident.

Apothecary John Rawlings, accompanying his friend Fielding to the ceremony, sets out to investigate, and - despite the fact that his wife Emilia is expecting their first baby - is soon drawn into a very intriguing mystery. And it seems that children might in fact be the key to unlocking the puzzle...

Death at St James Palace was first published in 2002. Order this book from Amazon in the new paperback edition download the Kindle ebook.

It is also included in the box set John Rawlings Investigates: Part Two.

"A masterly Georgian historical with a keen sense of time and place, fully fledged characters, and comfortable prose. Strongly recommended"

"Told with an infectious enthusiasm and a sly wit, Lake vivifies the period through her portrayal of the courtly, ever-witty John Rawlings"