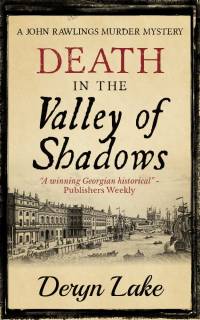 Death in the Valley of Shadows

Working in his shop one early afternoon, Apothecary John Rawlings is taken aback when a middle-aged stranger rushes in through the door looking panic-stricken.

The man is not seeking a cure for a terrible ailment, however, but a place to hide. John agrees and a moment or two later a formidable woman comes to the counter enquiring if the Apothecary has seen anyone answering the description of the stranger he has in his back room. Honouring his promise to the man, John sends her on her way and, intrigued, goes to question the fellow.

It transpires that the man's name is Aidan Fenchurch and he is being pursued by Mrs. Ariadne Bussell, a former lover who is reluctant to give up the chase. So reluctant, in fact, that she has been shadowing him for years.

Feeling sympathy for Aidan, John agrees to do him a good turn but is shocked when a few days later the man is found dead. Suspicious, Sir John Fielding sends the Flying Runners to arrest Mrs Bussell, who is taken ill in the coach before she can be thoroughly questioned. The Apothecary recognises the signs of fatal poisoning.

As the victims begin to pile up John Rawlings embarks on a journey that leads him to the Surrey countryside in search of answers.

Death in the Valley of Shadows was first published in 2003; it is now available in a Kindle edition from Lume Books. 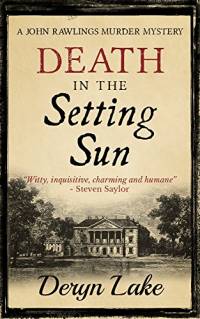 Death in the Setting Sun

John Rawlings has never been happier. His apothecary business is doing well and he is blissfully content with his charming wife and adorable little daughter. Little does he know that his settled life is soon to be tragically shaken off course...

An evening out at an illustrious theatre party at Gunnersbury House, hosted by Princess Amelia, ends in tragedy when a guest is discovered murdered. Suspicion falls upon John Rawlings when he is found crouched over the inert figure.

Despite his protestations of innocence, many at the scene, including the royally powerful Princess Amelia, believe John is the murderer and he is forced to go into hiding. John and his closest friends desperately try to delve through the layers of deception to uncover the truth, whilst struggling to come to terms with their own grief. Countless adventures teach him it is not always easy to tell friend from foe and there are far more late night dealings at Gunnersbury House than he at first expects.

But somewhere the vicious figure of the murderer is lurking and it is up to John to determine their identity before they strike again...

"Witty, inquisitive, charming and humane... The author cannot write new volumes as quickly as I want to read them... Long may this series continue!"

Death in the Setting Sun was published in 2004; it is now available in a Kindle edition from Lume Books. 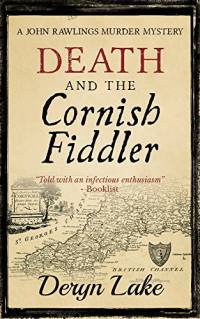 Death and the Cornish Fiddler

The eleventh mystery featuring apothecary John Rawlings is Death and the Cornish Fiddler.

The spring of 1765 brings a welcome sense of recovery to the recently widowed Apothecary, but his tentative peace of mind does not last for long: a young child disappears in strange circumstances at the Helstone Floral (Furry) Dance, and a seemingly omnipresent blind musician is never far away. While this mysterious figure intrigues John Rawlings, the case of the missing child alarms him: he feels he must do all in his power to attempt to rescue the young life.

The Apothecary is just about to give up the child for lost when a beautiful woman - a known courtesan -dies one night, apparently of natural causes. But a minute examination reveals that she was smothered, and the hunt is on to find which of her many lovers was responsible. Accompanied by one of them, the feckless Tim Painter, John travels to Redruth and there stumbles across a coven who practise the black arts. Recognising some of its members as attending the Furry Dance, he returns to Helstone, this time to find his own daughter in deadly peril...

In this tense and dramatic book, John Rawlings questions whether his love for Elizabeth di Lorenzi is one that can ever be fully reciprocated, or if he must come to terms with living once more as a single man.

Death and the Cornish Fiddler was first published in hardback in 2006 by Allison & Busby: it is available as a Kindle ebook 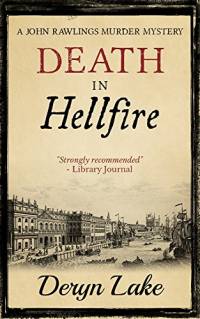 Apothecary-turned-sleuth John Rawlings is preparing to undertake his latest investigation - into the notorious Hellfire Club.

Rumoured to have been founded by Sir Francis Dashwood and its members the highest echelons of British society, the club is a byword for scandalous behaviour.

Armed with an aristocratic back story, a faithful companion and a dubious Irish accent, Rawlings descends on Sir Francis's home attempting to gain an invite to the debauched gatherings at Hellfire headquarters, Medmenham Abbey.

But events soon take a darker turn when one of the club's attendees is found dead.

Should Rawlings abandon his aristocratic disguise in order to investigate?

After all, one member of the household, a beautiful former lover, already knows him for who he really is.

When another visitor to the house is discovered dead soon afterwards, it becomes clear the deaths are not accidental and that Rawlings must take control.

Can he crack the case before another victim is killed?

Scattered with real characters from history, this is an 18th century murder-mystery romp from a true mistress of the genre. 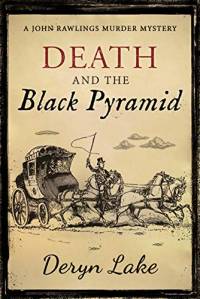 Death and the Black Pyramid

Apothecary John Rawlings has been summoned to Devon by Elizabeth di Lorenzi, his beautiful but unpredictable mistress. Leaving his young daughter Rose in the good care of her grand-father Sir Gabriel Kent, Rawlings sets off for Exeter on board the stagecoach. His fellow-passengers are a motley crew, and include a large and talkative German lady; Cuthbert Simms, a dance-master; and Jack Beef, the so-called 'Black Pyramid', a bare-knuckle fighter.

Before the journey's end a man has been found brutally murdered at the Half Moon Inn, and Rawlings is once again drawn, somewhat reluctantly, into a complex and dangerous intrigue.

Death and the Black Pyramid was published by Severn House in 2009; it is now available as a Kindle eBook, and is included in the box set John Rawlings Investigates: Part Four. 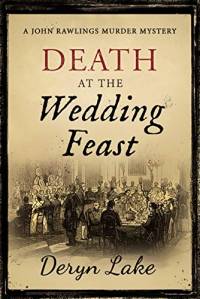 Death at the Wedding Feast

John Rawlings is back... and this time he's battling against a prophecy of his own death.

Apothecary John Rawlings has travelled to Devon to be by the side of his mistress, Elizabeth di Lorenzi, who is due to give birth to their child. Leaving his shop - and his new carbonated water business - in good hands, John is presented with a surprise on his arrival at Sidmouth House.

While Elizabeth is recuperating, he learns that Lady Sidmouth's daughter, Miranda, is to marry the Earl of St Austell, who is fifty-two years her senior. The Earl has a cruel reputation and John feels that no good will come of this unlikely match.

As the wedding day approaches, John feels increasingly uneasy, and he is especially mindful of a vision his daughter, Rose, had about an evil old woman who may do him harm. Before too long John's fears are confirmed, and he soon finds himself at the centre of a murderous plot that must be unravelled...

Death at the Wedding Feast, was originally published by Severn House in August 2011 in the UK, and in December in the US); it is availablr in a Kindle edition from Lume Books, and is included in the four book Kindle box set John Rawlings Investigates: Part Four. 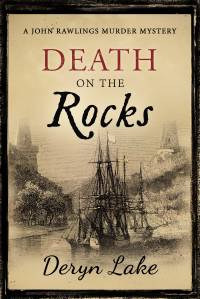 Death on the Rocks

Apothecary John Rawlings is intrigued when a letter arrives asking him to investigate an impostor claiming to be the long-lost step-son of a wealthy Bristol merchant in possession of his dead wife's diamond inheritance.

John Rawlings' father, Sir Gabriel Kent joins him on the trip to take the healing waters at Hotwell where they socialize with the creme of Bristol society. But Rawlings is compelled to try and solve the mystery and so he must trawl through the underbelly of eighteenth-century society to unearth the sordid secrets at the heart of the investigation.

Death on the Rocks was published by Severn House Publishers on 19th December 2013; it is now available in a Kindle edition, and is included in the four book Kindle box set John Rawlings Investigates: Part Four. 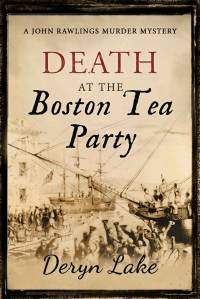 Death at the Boston Tea Party

1773. Following a long and perilous journey, Apothecary John Rawlings has arrived in Boston, Massachusetts, to pursue a new business venture...

Rawlings finds the place riven with tension and unrest. There are many who feel it's time the colonies sought freedom from British rule, and the seething resentment erupts into outright rebellion during the notorious Boston Tea Party. But has someone taken advantage of the chaos to commit cold-blooded murder?

Called in to examine a body fished out of Boston Harbour, Rawlings recognizes one of his fellow travellers from England. If he could unearth the truth about the victim's past and the reason why they'd come to Boston, he would be one step closer to catching the killer. But has Rawlings become a pawn in an altogether bigger game?

"Newcomers and devoted fans will delight in the period detail, excellent mystery and well-drawn characters"

Death at the Boston Tea Party was originally published by Severn House; it is available in a Kindle edition, and is included in the four book Kindle box set John Rawlings Investigates: Part Four.

Earlier books in this series