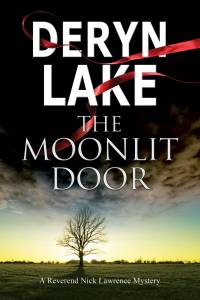 A new puzzle for the Reverend Nick Lawrence ...

It is May in the sleepy village of Lakehurst, Sussex, and Nick Lawrence has organised a Medieval Fair, complete with maypole dancing, archers and Mr Grimm's men, a group of Morris dancers.

The fair is enjoyed by all and a great success, but once the village green is deserted a horrific event takes place that shocks the whole village. A young orphan, Billy, is shot through the heart with an arrow and his body covered with the ribbons from the maypole.

It is up to Nick and Detective Inspector Dominic Tennant to try and find out who would commit such a horrific crime - and why?

The Moonlit Door was first published by Severn House in November 2014: it is available from Amazon in hardback and paperback editions. 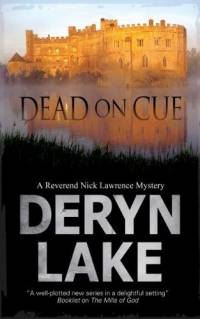 A new arrival to Lakehurst village can only mean trouble for Reverend Nick Lawrence...

The residents of the sleepy Sussex village of Lakehurst are abuzz with the news of the arrival of Gerry Harlington, a flamboyant American actor and the new owner of Abbot's Manor, with his glamorous wife. The local dramatic society recruits him as their director for their new show, but his ideas are met with violent protest from the amateur actors.

So when a corpse is discovered after the grand opening night, Reverend Nick Lawrence doesn't have to look far to find potential suspects...

Dead on Cue was originally published by Severn House in October 2012; use the links below to order your copy, or ask your local bookshop or library to order it for you, quoting title and author. It may also be helpful to give them the ISBN. 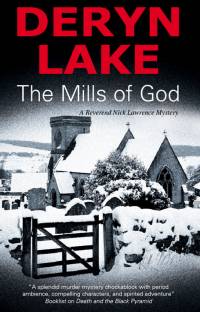 The Mills of God

This is how Deryn Lake introduced The Mills of God, the first in her new series of contemporary detective novels:

"Yes, you're right. It's not a John Rawlings. In fact it is what is labelled by the publishers as a 'cosy', though with a serial killer on the loose and several gruesome murders I would hardly describe it as that. However, it is set in a sleepy Sussex village which is woken up with a start by a double knifing.

"It introduces two new characters who I hope you will rather like: Nick Lawrence, a jolly vicar, who is - in his own way - interested in everything going on around him; and Dominic Tennant, the Inspector of Police with a twinkle in his gooseberry-green eyes."

The sleepy, eccentric Sussex village of Lakehurst suddenly becomes a place of terror and night shadows. After dark, it is hardly safe to go out, to the consternation of the newly arrived Vicar, trendy young Nick Lawrence, and Inspector Dominic Tennant of the Sussex Police Force. For a serial killer is on the loose: one who leaves notes at the scene of his crimes signed 'The Acting Light of the World'.

According to Deryn, "Nick is young and on-the-ball and arrives in his new parish only for a series of crimes to break out. He is rather a nice character and I hope the readers will take to him. Inspector Dominic Tennant of the Sussex Police. He is a pixieish man whose hobby is amateur drama. Yet the poor blighter hardly ever gets to complete a part because his work takes over. And he certainly has a tough nut to crack with the Lakehurst murders. What with famous film stars of the fifties and ageing matinée idols, to say nothing of an aristocratic German, poor Tennant has to drop out of yet another production."

The Mills of God is published by Severn House; use the links below to order your copy, or ask your local bookshop or library to order it for you, quoting title and author. It may also be helpful to give them the ISBN.